Play is a natural and necessary aspect of behavior for all species. In the equine world, foals and young horses need to play with horses of a similar age to develop social skills and a healthy mind. Play is a distinct system in the brain which facilitates the expression of the practicing emotional states in safety, without intent. Play involves adaptive movements, strategies, repetitions, versatility, and novel behaviors. Common movements, motor patterns and vocalizations that are employed in daily life and in situational contexts, such as sexual or aggressive behavior, are adapted when playing. 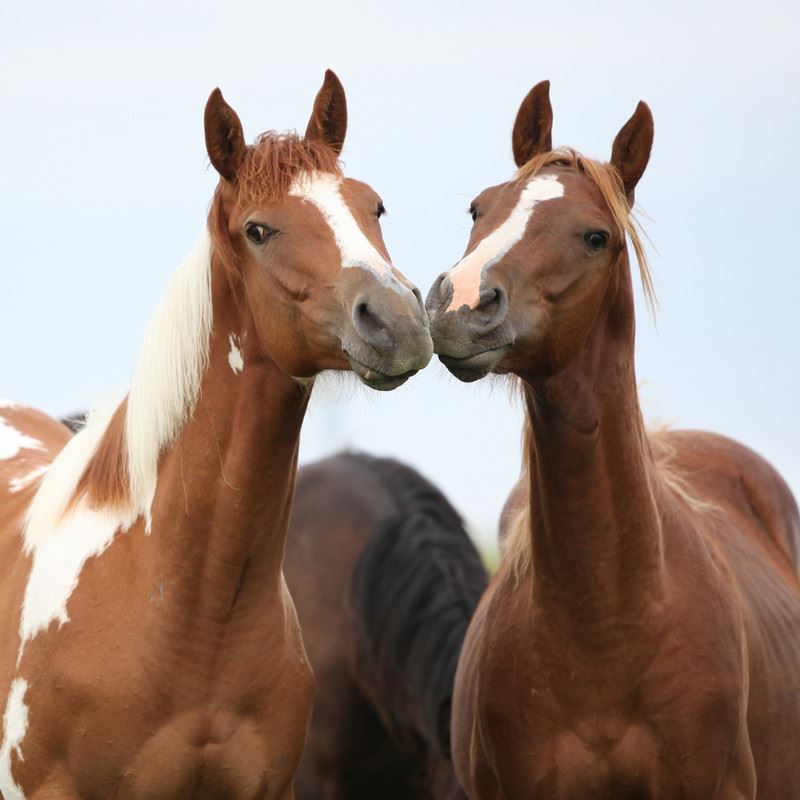 Play is an important part of social bonding and cooperation. Evidence supports increased creativity and flexibility during play, which may facilitate better problem-solving. Play also substantially impacts emotional health, impacting many aspects, such as emotional resilience, satisfaction, contentment, achievement and joy. Major psychological issues may result from a lack of play: Play is inhibited by negative emotional states such as fear or separation distress and poor physical health. A lack of social interaction and relationship bonds diminish the desire to play, while play deprivation can result in intense bouts of play when the opportunity arises. The urge to play is “an intrinsic function of the mammalian nervous system.” (Panksepp, 1998). In other words, it is a necessary part of a healthy psyche.

The social structure of the herd, along with the environment the animals live in both influence play. Foals living in a natural family structure engage in play more frequently than groups of mare and foal pairs at pasture or domestic mare and foal pairs. The social environment is extremely important to the type and quantity of play foals experience, which subsequently influences their development. Social skills, personality, self-confidence and self-awareness may all be affected and shaped by whether or not a foal has play opportunities in the right form.

Horses are still playful at this stage in their development and play may be between horses of the same age or cross over to play with horses in other age groups.

In a natural setting, adult horses do engage in play with each other but at a much lower frequency than play between adults and foals, yearlings and young adults. An increase in play is seen in domesticated adult horses compared to a very low frequency of play observed in feral adult horses. There are some correlations between levels of play and poor welfare. Horses in a more natural type of environment play less than those kept in single boxes with limited turnout time. Horses that were observed to be the most prolific players were shut down and unresponsive in their boxes, and had a more negative relationship with people (Hausberger, Fureix, Bourjade, Wessel-Robert & Richard-Yris, 2012).